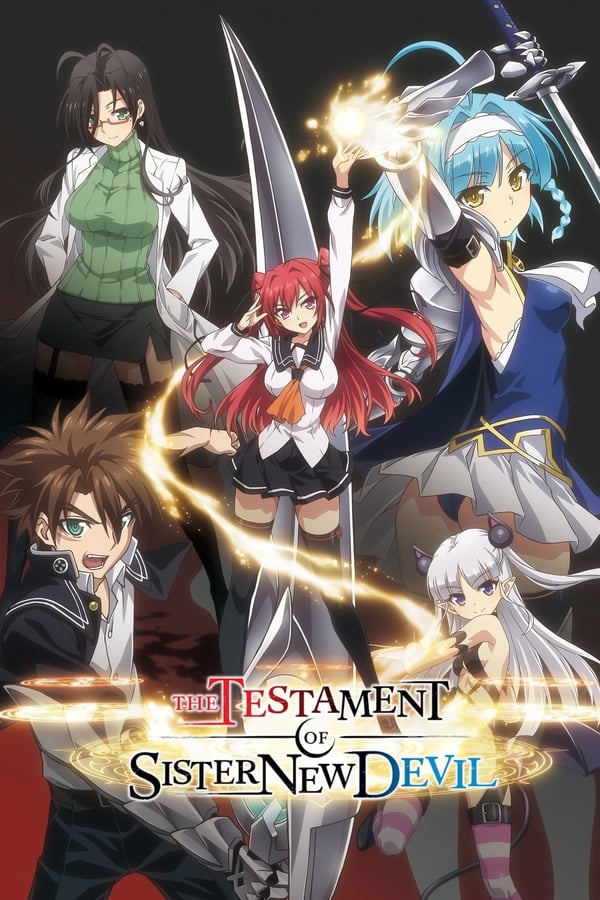 The Testament of Sister New Devil (2015)

Basara Toujou met his two cute little sisters, Mio Naruse and Maria Naruse. The two sisters revealed themselves as a member of the demon clan and Basara as a member of hero clan, demon clan's enemy, and is not related by family. Mio is the future Demon Lord and since Mio's power is not fully awakened, Basara will protect her from the demons who are after the power she inherited from her deceased father, Demon Lord Wilbert.

Specials of The Testament of Sister New Devil premiered on Mar 27, 2015.

Another morning at the Toujou household: Maria sets up a special succubus camera that can capture the target's dream, in this case Mio's. After putting an end to Maria's blatant breach of privacy, Basara then tests Maria's latest cooking experiment which turns out to be strangely perverted. Yuki is not phased by any of this, and when Mio finally wakes up the innocent Basara falls victim to her outburst. The school nurse, Hasegawa Chisato, is wearing a new swimsuit and the zipper is stuck. She asks Basara to help her unzip it...

First-year high school student, Toujo Basara, was suddenly have two beautiful step-sisters adopted by his father. But Mio and Maria's true forms are actually the newbie Demon Lord and a succubus!?

Thanks to his father's sudden remarriage, Toujou Basara finds himself with two beautiful new step-sisters. Their names are Naruse Mio and Maria. Mio wakes him up in the morning, while Maria stands in the kitchen wearing a suggestive outfit...

As daughter of the former demon lord, Mio's foster parents were slain by powerful demons after her life. Still seeking to slay her, Basara reveals himself as a member of the hero clan--an enemy of the demons--and vows to protect Mio as a member of his family.

Basara's childhood friend Nonaka Yuuki warns him not to get involved with Naruse Mio any longer. She is a fellow member of the hero clan, and the one charged with observing Mio. She claims that Mio will bring great disaster, but Basara proclaims that he will protect Mio as a girl on his own.

Basara suffers a deep wound in the battle against the white-masked man after Mio's power. Mio regrets getting Basara involved, and challenges the white-masked man to battle on her own. Meanwhile, in order to protect Mio, Basara resolves to use the "forbbiden art" he sealed away after the events of his past. What was the tragedy that visited the hero village and Basara?

With the battle against the white-masked man settled, they returned to their bawdy daily life. Basara wakes up with his hand groping Maria's butt, he runs into a naked Mio when he enters the bathroom, and Yuki sneaks into the bath with him. The master-servant pact lying at the heart of everything. Accoring to Takigawa, his classmate and the white-masked man, the pact between Basara and Mio holds another secret. Meanwhile, Basara's childhood friend Yuki invites him out on a date...

Basara goes on a date with Yuki. Unaccustomed to the shopping center, when the two of them are overwhelmed by a clerk's sales talk, Mio stops following to rescue them.

Basara leads Mio to higher peaks as he pursues pleasure with the use of syrup. With their master-servant pact reaching a new level, they both bring their full might to face the ones trying to eliminate Mio: Takashi and Kurumi.

Ten days pass since the battle with Takashi and others. Although the battle ended with reconciliation, Yuki returned to the hero's village. ...or she was supposed to, but when Basara returns home, he finds Yuki in an apron!

Basara and Yuki begin the ceremony to form their pact. Clad in a bustier and garter belt, Yuki was raring to go for it, but she refused to forge the pact normally, and suffered the same succubus curse as Mio.

Mio has been captured by Zolgia following Maria's betrayal. Basara too is captured by Lars and brought to Zolgia's mansion. Lars' goal is to exchange Basara for Mio. He explains that he's only doing his duty as Mio's observer, but negotiations fail, and Zest slays him.

Strength as a human, the power to rend evil--With the power inherited from his father, Tojou Jin, Basara faces off against Zolgia. Basara is driven by the desire to protect his precious family. That desire gives him strength, and even as Zolgia pushes him to the edge, he rises without breaking. However, even Basara eventually runs out of strength facting that all too powerful might. His mind in despair, he's unable to escape from Zolgia's dominion...

Everyone is trapped inside the body of the demon realm's most dangerous creature, a beast capable of infinitely multiplying until it swallows the entire world. Dimensionally cut off, the only remaining option for Basara and the others is to completely eliminate this dangerous creature's vital core.

While Basara, Mio, and Yuki have picked up their seemingly ordinary lives, they were attacked by magic-wielding humans when preparing for the upcoming sports event. Basara tries to become stronger by strengthening the testament when Rukia, Maria's sister, suddenly appears. Unknowingly, the war deciding the future of the demon realm has started.

After ending the battle against Zolgia, Basara regains his peaceful life with his two little sisters, Mio, the daughter of the previous demon lord, and Maria, her little sister who's also a succubus. As Basara pursues the preparations for the sports festival at school, one day he's attacked by a person being manipulated by magic. Recalling the strange gaze he felt at school, a suspicion of his begins to grow...

The day of the sports festival is finally here. Though Basara remains cautious of the mysterious enemy who manipulates people with magic, he happily enjoys the sports festival with Mio and Yuki as the three of them compete in the four-legged-race and enjoy their youth getting entangled and sweaty with each other. Meanwhile, Kurumi, who was placed in charge of guarding the school, discovers a suspicious individual. At almost the same time, a giant twister forms on the sports field. Basara fights to protect the students... but an unexpected individual appears!

After taking Kurumi hostage, Ornis robs Basara of the right arm wielding Bynhildr. Though he lost conciousness from the pain, his sealed power unleashes and goes on a rampage. Their positions are reversed as he corners Ornis with his overwhelming power. However, the moment he tries to silence Ornis for good, a golden chain appears and binds him. When Ornis turns around, he finds Hasegawa Chisato. What secrets has she kept hidden?

Ramsus is out to extract the "Demon Lord's Power" that Mio possesses, and Basara reveals his anger at Ramsus' lack of concern for Mio's safety. Just as sparks are about to fly, Shella interrupts them. She leads Basara into the bath to try and help calm him down, and when Zest appears, she orders Zest to massage and wash Basara's body with her bountiful bosom. Then Shella tries to get Basara and Zest to forge a master-servant pact...

Basara and the others recieve a message from Lars, calling them to Leohart's royal castle. Then Basara's father, Toujou Jin, appears before them all. He brought with him another message from Leohart. A message saying that they would hold a tournament before Leohart and Ramsus' forces to determine authority of the demon realm--authority of the demon realm being synonymous with Mio's power. After being selected as the representatives, Basara begins learning "how to win" from Jin.

Basara and the others finally face the current demon lord, Leohart. Leohart's confidence in his strength fills the air as he welcomes them in without any tricks. Can they really beat him? After Maria encourages them to do what they can for now, Basara commands Mio, Yuki, Maria, Kurumi, and Zest to strip for him. Using items full of aphrodisiacs, they lick, molest, and entwine together...

The group battle between Leohart and Ramsus's forces finally begins. After Mio wins the first match, Maria enters the arena for the next round. Her opponent is Lars. Maria uses her enormous power to face him in close combat, but she fails to overcome the gap in experience and magic power, and gets driven into a corner by Lars' clever attackes. What does Maria pull out in hopes of overturning the battle...? Meanwhile, the demons lay a cowardly trap for Kurumi.

The only remaining match of the tournament is the duel between leaders, Basara vs Leohart. Basara finally appears after his long time in hiding, and faces off against Leohart. The two demon swords clash in fierce battle. Though Basara manages to keep up with Leohart, Leohart clearly holds an overwhelming advantage. Basara is unable to use his Banishing Shift due to the large opening it creates. What secret strategy does Basara pull out in the fight...?

The council's rampage sends quakes through the demon realm, and the demon Chaos is called forth through a giant magic circle. That commander of all heroic spirits flails madly, seeking to claim Basara, Mio, and Leohart's lives. Do they even stand a chance of victory with this supreme being before them?! Meanwhile, Maria, Yuki, and the others put a final end to their own personal battle. "Believe in me... once more." The ultimate sibling combo risks their lives to face the disaster striking all of the demon realm!